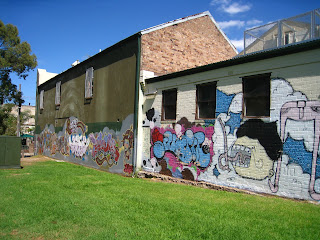 Today has been just one of those days... it poured with rain, and I mean POURED!!! On my walk home from school, had I not ducked into a grocery store, I would have been drenched faster than if I were in my shower with the water on full blast. The gutters on King Street were flooding, giving rise to enormous waves of spray from cars speeding past. Of course this just happens to be the day after I hang my (only set of) sheets out to dry... groan. Worse, the forecast is not exactly conducive to them drying anytime soon.
I suppose that it could have been worse; for most of my time outside today it was only lightly spitting. Not that anyone wielding their huge pointy umbrellas whilst wading through the throngs of students walking across the bridge at uni would know or care. Heaven forbid they get one droplet of rain on themselves for the sake of not poking out everyone else's eyeballs.
And another thing. What is up with people having out of control conniptions in public??? Once again I was forced to nervously skirt around a couple engaged in some kind of flagrant domestic dispute outside the bank this afternoon. The one with the leg amputation was maniacally waving her crutch around in an apparent effort to emphasize whatever point she was making to her equally irate partner. This is only the latest example in a series of volatile public displays near where I live. Needless to say, Newtown is quite a 'lively' neighbourhood. For my readers in Toronto, I feel like it's Queen West meets College and Spadina: cool, trendy restaurants and stores, mixed with thrift shops, dive bars and some very 'eclectic' folk. There's also plenty of garbage and graffiti, which, while I concede has merit as a subcultural method of political commentary and artistic impression (the graffiti, not the garbage), it still takes some getting used to. While I'm trying to be open-minded, I can't help but see it as a symbol of a lack of presence of law enforcement, which is not the most comforting thing for a newcomer. Here are some photos of the park I walk through twice daily. What do you think?
On my daily commute to school (on foot) I walk through this pretty park. 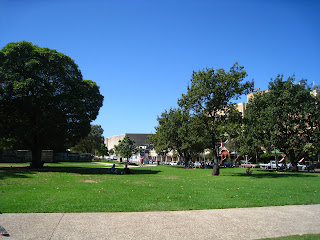 It's a beautiful park during the day, but as with most inner city parks, a bit on the dodgy side at night time. 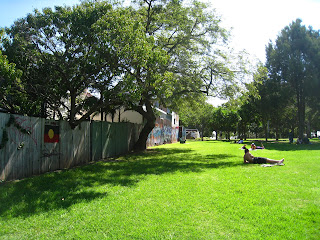 The afternoon picnic is a regular weekend event for many groups of people in this park. 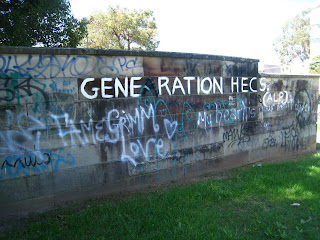 Hecs is the name of the Australian student loan scheme. I thought this was rather clever.