G'day to all my loyal readers. Apologies for being awol the past week or so. I've been very busy job hunting and trying to get "me head" around contracts. My how judges love to write in such a way that makes English sound like another language! To make up for my utterly lack-luster (ok "academically productive") weekend last week, this past weekend was filled with fun! First up was a reunion with a mate from Oakville, Missy, whom I know through a couple mutual friends and from taking her amazing fitness classes at Goodlife in Oakville. (Oh how I miss my spa-like women's gym in Oakville!!) She was in Sydney for the weekend and of course we just had to say hello!  We went to a German Pub in The Rocks (the oldest part of Sydney where many original, convict-built buildings are still in use) for a 'bier', followed by a stop at a gourmet chocolate shop where I treated myself to one luscious chocolate truffle. 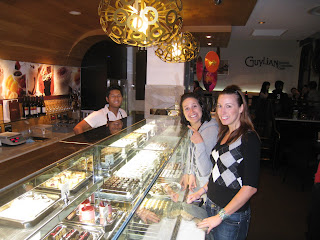 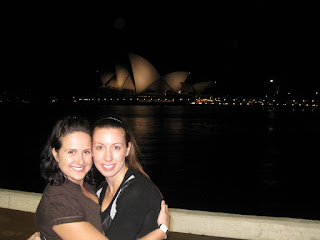 Next we wandered down to the harbour to take in the magnificent Opera House and Harbour Bridge. (Did you know the Aussie government originally set up the Australian Lottery to raise funds to build the bridge?). It was great to see her but sad to say goodbye after such a quick visit. 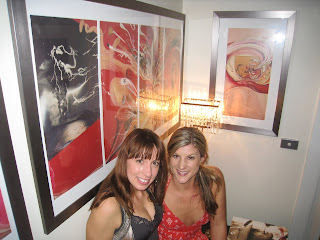 Next up was dinner with my new friend Jane. Jane was one of the first people I met in Sydney and we hit it off right away! She has amazing taste in art, decor and clothing (as evidenced here in these paintings and her clothes which I am wearing). Her jazz musician bf came over and we all sat down to a divine Thai curry Jane whipped up while I was playing dress-up in her closet. 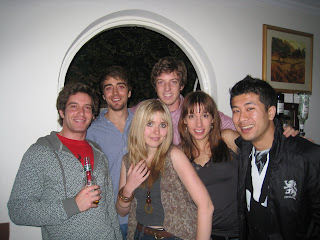 My new uni friends gathered at our mate Angus' new house in Paddington for his house warming party. The house is gorgeous. Think stone floors, high ceilings with ornate crown molding, arched doorways, beautiful furniture and artwork shipped over from Zimbabwe and even a famous guy next door! 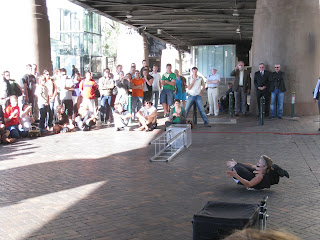 You never know what you're going to see when out and about in Sydney. Saturday was no exception as my route took me via Circular Quay where this contortionist was demonstrating how she could put her legs behind her head and rotate herself around in circles on a disk. I moved on just as she was about to squeeze herself into a small box atop a ladder. I'm a bit leery of stunt shows after watching the youtube video of the escape artist who almost drowned whilst performing a stunt at a basketball game half-time show. 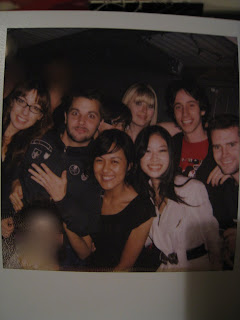 That night was my friend Bonnie's 21st birthday party. In Australia 21sts are a really big deal and people go all out for the celebration. We listened to speeches and watched a slide show while devouring the huge spread of lasagnas, schnitzel, garlic bread and brownies. Yum! There was music and dancing and even an impromptu sing-along! I loved the Polaroid camera. The images made me think of a classic 1970s scrapbook. 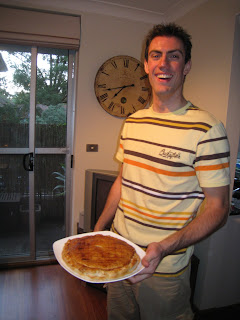 Finally my weekend ended with La Galette! A gathering of friends at my mate Christophe's flat to eat galette, which apparently is a french pastry dish. Hidden inside is a little token and whoever gets that in their slice is the "king" and gets to wear a crown. Not to be one to show up empty handed, I baked a lemon cake using my new-to-me silicon cake dish bought at a garage sale a while ago. Works really well! 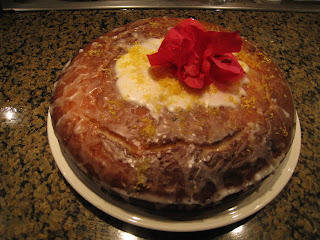 The dog drama. It's been 2 months since I first moved here and while I LOVE my house I am not loving the dogs across the ally. Rather, I'm irritated at their owners' flagrant disregard for neighbourhood peace and quiet. Every time they leave the house these owners leave their 2, very easily excited dogs, outside in the backyard. Each time someone walks by the dogs bark and yap and cause an unholy racket, sometimes for hours on end. This of course, is occurring at all hours of the day. I've even been woken up at 6am on a Saturday morning for Christ sake! After two solid hours of barking yesterday afternoon while I was trying to work, I'd finally had enough. I went round to the house to find that I couldn't even knock on the door due to a large gate with a deadbolt preventing access to the front yard area. (Probably to keep people like me out.) Incidentally another neighbour, also at his wit's end was investigating the noise and recommended we call the council to lodge a complaint. I followed through this morning and I am eagerly awaiting my "dog bark kit." Also, they promised to send these people some "tips on keeping dogs quiet." I wait with baited breath to see the results. Stay tuned!
Posted by Jess at 1:41 AM No comments:

Well it's a little sad that I'm away from my family during Easter but I'm consoling myself by eating all the chocolate that's being distributed here in Australia. I'm shocked at how big a deal Easter is here. I feel like at home Easter is kind of a blip on the radar for kids and the people who design store displays. Here it's a full on cultural holiday with bakeries inviting customers to "beat the rush" and "order your Easter hot crossed buns today!" We get a whole week off uni (news to me as of 5pm last Wednesday when it came to my attention that we didn't have class next week.) Everyone from my Contract Law professor to my pilates instructor has been handing out chocolate and there are celebrations aplenty- fairs, picnics, and boozy nights out on the town (not me of course, I'm too busy studying.) Yesterday (Friday) I was half thinking that I'd perhaps visit the fish market as I had the day off and it's something that has been highly recommended to me to explore. That idea was quickly given the kybosh when I heard on the news that Good Friday is the Sydney Fish Market's busiest day of the year, with over 50 000 visitors expected. Of all the days to think to go it had to be Good Friday! lol. Sufficed to say that plan is taking a raincheck. I did make my weekly trip to the market this morning and came home with a suitcase (my new shopping strategy) full of fresh fruits and veggies and my very favourite yogurt. I combine this award winning yogurt with fresh passionfruit for the most divine snack in existence. Here, take a look. 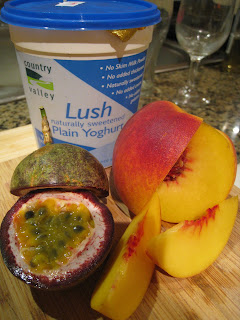 Simply combine these ingredients and... 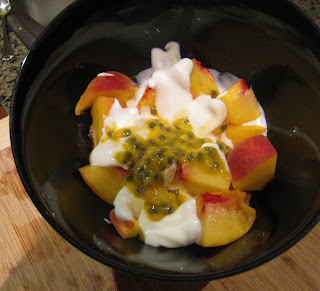 Voila! A healthy and scrumptious snack!
To all my friends and family at home, (and anybody else who reads this)- Happy Easter! I miss you!!!
Posted by Jess at 12:29 AM 1 comment:

My absolute favourite book about Australia- "In a Sunburned Country" by Bill Bryson, has a particularly amusing section about the unusual place names in Australia. On the topic, here is a favourite quote from the book; it puts a smile on my face every time I read it.
"In the late afternoon, I stopped at a roadhouse for gas and coffee. I studied my book of maps... Then, having nothing better to do, I leafed through the index and amused myself, in a very low-key way, by looking for ridiculous names, of which Australia has a respectable plentitude. I am thus able to report that the following are all real places: Wee Waa, Poowons, Borrumbuttock, Suggen Buggen, Boomahnoomoonah, Waaia, Mullumbimby, Ewylamartup, Jiggalong, and the supremely satisfying Tittybong."
I highly recommend this book to everyone, regardless of whether or not you plan to ever travel to Australia.
One warning: Read in public at your own risk; I've read it twice and both times had to eschew reading it in public as it unfailingly, and embarrassingly led to loud and uncontrollable fits of laughter and guffaws. But I digress.
Reading my copy of today's Sydney Morning Herald, I was similarly amused by the following anecdote from the Column 8 section, similar to The Globe and Mail's Facts and Arguments:
"More on compass points and peculiar place names, from Stuart Prosser, of Otford. "John Flower of Potts Point may be unsurprised to learn that a friend of mine from the north-east of West Sussex was mightily amused to learn that Woomera is situated in central north South Australia."
LOL!
Posted by Jess at 7:10 PM No comments: 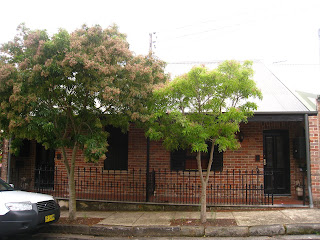 The outside of my house... see the front window behind the tree on the right? That's my room!!
Voila! 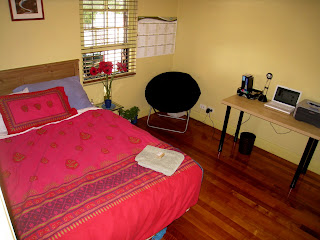 After two months of varying degrees of rather make-shift arrangements, I think my room is almost fully furnished. 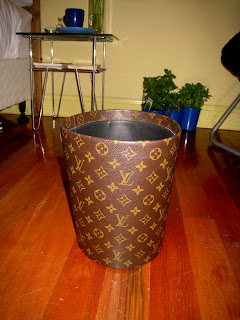 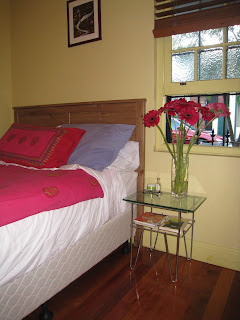 My new side table is working out well. At $5 at a garage sale, I thought it was a steal! 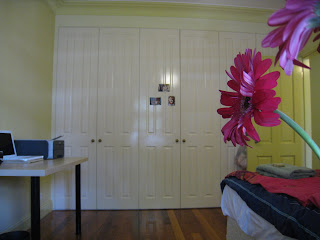 Closets galore! Storage space to hide almost everything. Also my fabulous desk. $20 second hand I might add. All I need now is a chair and I'll be set.

Here it is everyone...the moment you have all been waiting for. I finally took some pictures of my room! I love it. It's got a great window with a nice breeze, high ceilings, plenty of closet space and although it's on the first floor of our two story house, my room is not under any of the upstairs rooms so it's pretty insulated from noises within the house. Good thing too cause I get plenty of that from the neighbourhood dogs vociferously greeting each other every morning at 7am, 6am on weekends.
Posted by Jess at 10:28 AM 1 comment: