Of course, the moment I've been waiting over a year for- one of my bestest friends from high school arrived in Sydney with her sister. They've been travelling around the world since last year, and were in Asia when I went back to Toronto over Christmas. In any case, the reunion this year was amazing and we were very fortunate to be able to spend some great quality time together.
We packed so much in to the girls' short time in Sydney... 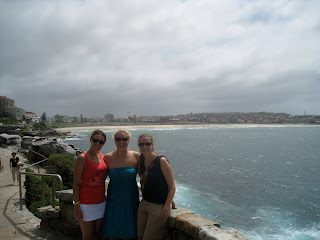 No trip to Sydney is complete without a visit to Bondi Beach... 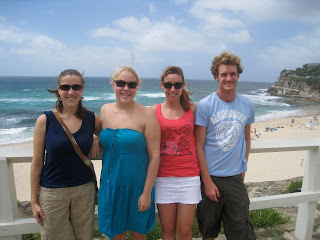 We added to the Bondi Beach excursion by parking at Bronte Beach and walking the magnificent coastal walk to Bondi... 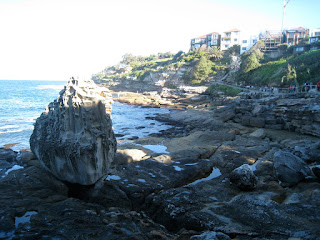 Not to be outdone by Bondi Beach, Nick took the girls and me to his hometown beach in Stanwell Park! Towels and surfboards in tow, we left Nick's house and a mere 5 minute walk later we were on one of the South Coast's best "secret spots" (that's surfing code for places only locals know about.) Nick was nice enough to show me and the girls a great time surfing and bodyboarding and generally having a blast getting jiggy with Mother Nature's wild side!!! 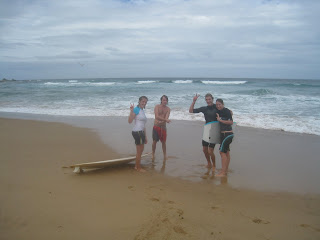 The expert comes back to shore after showing us some of his killer moves! 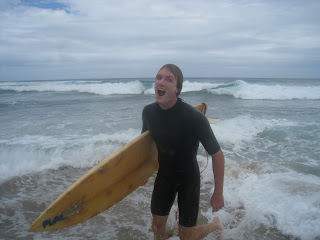 Nick and I walk towards the waves with Rach and Josh close behind... 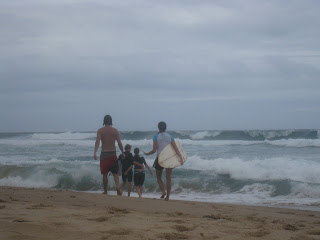 Time for Jen to show us what she's got! 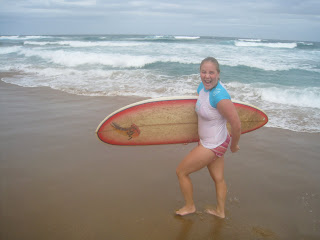 There's no better way to work up an appetite than surfing; luckily just around the corner is "The Kiosk" a local well, kiosk that sells everything from hot chips to homemade wattle seed ice cream. 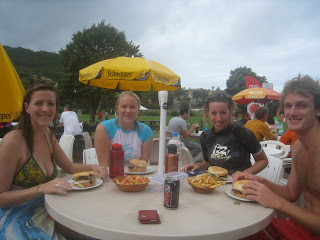 My all time favourite item from the menu, which also happens to be the BEST post-surfing meal ever is the "Lot Burger." Now folks imagine a BIG bacon and egg breakfast and the toppings from your favourite Hawaiian style pizza combined with the best burger you've ever rested your greedy little lips on, and that my friends is the Lot Burger. The whole thing is topped off with the obligatory slice of Aussie beetroot and it takes a mean appetite and a sold set of chops to make even a dent in this behemoth. I must admit, the ease and speed with which I put these babies away earned me my nickname "Guts" from my delightful boyfriend. 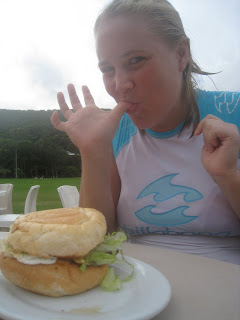 Miss Jen certainly certainly did give me a run for my money!
Speaking of making absolute piglets of ourselves, the girls and I happened upon a dangling donut eating competition while we were at Sydney Uni's Frosh Week. Not to pass up the chance at a free donut, the three of us elbowed our way to the front of the line and took our positions in front of the dangling donuts. The rules didn't sound too hard. Just eat the donut without using your hands: Well! Easier said than done. Turns out that swallowing a massive piece of donut while your cheeks are full of yet more donut is painful, and almost impossible. The most disappointing part was that I couldn't even taste the darn donut. I sure could feel it sitting like a led ball in my stomach for the rest of the afternoon though. I guess some lessons are learned the hard way, and that certainly was one of them! 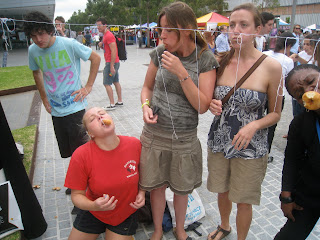 The one redeeming factor from the ordeal was the next booth Jen inhaled some helium and sang a rousing chipmunk rendition of "twinkle twinkle little star" to win a free red t-shirt. She was quite chuffed at the prospect of an upgrade from the red t-shirt she's been wearing for the past 8 months. 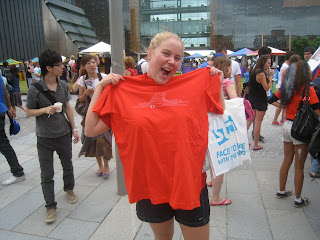 Jen is set to come back to Sydney for a couple of days next week and I can't wait to see her! Rachel is off in the outback working on a ranch so she won't be joining us but hopefully I'll get to see them both before they head home in a couple of months.
Posted by Jess at 10:37 PM No comments: